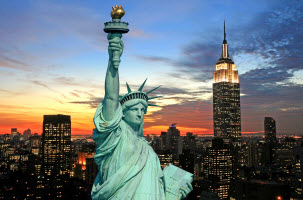 With the election of President Donald Trump, the markets may be volatile in the coming months due to the uncertainties, and we know the markets do not like uncertainly.

However, it’s  helpful to remember that these market gyrations are almost always bad times to trade, and particularly to sell.  We have months before the new president takes office.  Traders and analysts have plenty of time to settle down between now and the first 100 days of the Trump presidency, and evaluate whether America’s corporations are, indeed, worth much less than they were before election night.  But in the end, the intrinsic value of stocks typically don’t change with the occupant of the White House.

One of the more interesting things to watch out for is a tax reform proposal sometime in early 2017.  Along the campaign trail, candidate Trump proposed simplifying our taxes down to three ordinary income tax brackets: 12% (up to $75,000 for joint filers), 25% ($75,000 to $225,000) and 33% (above $225,000).  The wish list includes a doubling of the standard deduction, with itemized deductions capped at $100,000 for single filers; $200,000 for joint filers.  Capital gains taxes would be capped at 20%, federal estate and gift taxes would be eliminated and the step-up in basis would be eliminated for estates over $10 million.

However, one should remember that these proposals were made before anyone imagined that Americans would elect an undivided government, with the Presidency, the House and Senate all under the control of one party.  The next four years—indeed, the first 100 days of the new Presidency—represent an opportunity for the Republican Party to do something much more ambitious than simply tinker with our nation’s tax rules.  Influential Republican leaders—including House Speaker Paul Ryan—have reportedly been planning for some years to rewrite our nation’s tax code. The goal would be tax simplification  but what that would look like at  this point, we simply don’t know.

Of course, everything is speculation at this point, which is the most important thing to keep in mind as the markets roil and the shock and awe of the unexpected election outcome begins to sink in and cooler heads prevail.  The very worst thing you could do, over the next few days and weeks, is make a temporary loss permanent by selling into the general panic.

In fact, for those of you with “earmarked cash” to invest on the sidelines, we will be taking advantage of the dips in the markets to dollar cost in. It’s helpful to remember that in our free market system, with every downturn in the markets, the markets come back and rise to levels higher then previously posted.

As always, if you have concerns or questions about your portfolio, I welcome your emails or calls to help reassure you that this too will pass, and we will thrive again.