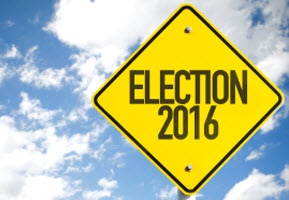 By now, most voters have made up their mind about who they want to serve as their next President. But what can they look forward to, from an investment and tax standpoint, if their candidate wins or loses? How will the election affect their portfolio and future net worth?

Let’s look at the least predictable factor. An analysis of historical market returns under different administrations gives a frustratingly incomplete picture. When a President comes into office and immediately enjoys a few boom years, is that due to his great policies or the policies of his predecessor? Similarly, when a President enters office in the middle of a recession (think Obama in 2009 and George W. Bush in 2001), can we attribute the weak market performance to any policies he hasn’t had a chance to enact?

The clichés that Republicans are better for markets than Democrats is hard to support based on the raw statistics. As you can see from the chart below, Richard Nixon and George W. Bush are the only presidents who presided over a net loss in the markets, while Bill Clinton and Barak Obama are second and third behind Gerald Ford as the presidents associated with the highest total gains. The record is too mixed, and too complicated, to make predictions based simply on the party that wins the white house. 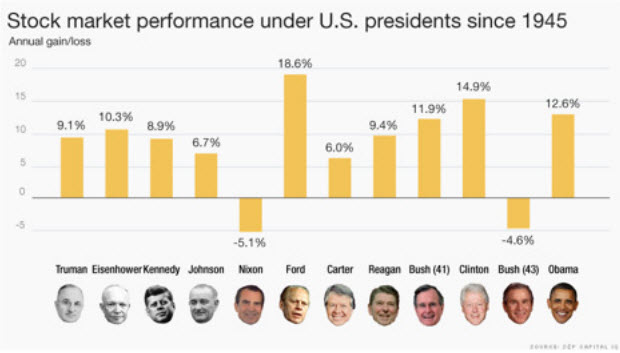 But what about something more concrete, like tax policy or budget deficits? Surely here we can read the tea leaves about the future.

Once again, the historical record can be misleading. President Reagan, known as a great tax cutter, lowered taxes with the 1981 tax act and promptly raised them again with new measures a year later. Democratic President Bill Clinton’s administration presided over the only budget surpluses of the modern era, while Republican President George Bush and Democratic President Barack Obama together, added more to the deficit than all previous presidents. 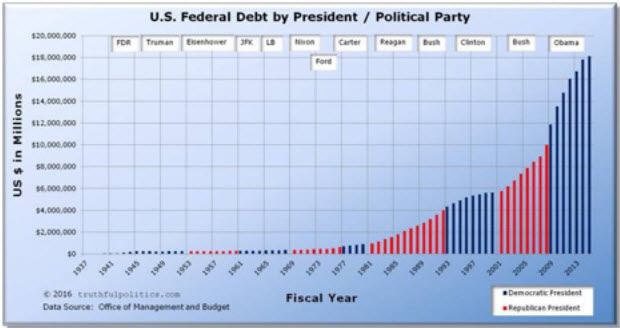 The most reliable clue we have about the fiscal and investment impact of a Trump or (Hillary) Clinton presidency is the actual proposals by the candidates—but even here we have to proceed with caution. It is unlikely that the Democrats will win the Presidency plus a majority in both the Senate and the House of Representatives, which means that a Clinton wish-list will be either stymied or compromised by divided government.

Nevertheless, if Clinton is elected, we know to expect certain changes to the tax code. There will be at least an attempt to add a 4% surtax on incomes above $5 million, an end to the carried interest deduction favored by hedge fund managers and other Wall Streeters, plus a cap on itemized deductions when people reach the 28% tax rate. The existing $5.45 million estate tax exemption would be reduced to $3.5 million $7 million for couples) and estate amounts above that figure would be taxed at a 45% rate. Wall Street brokers would be hit with an unspecified surtax on high-frequency trading activities.

A President Trump would be more likely to get his wishes, but what, exactly, these would be is far less certain. You can get a picture of the fuzziness of his policy proposals when you look at his promise of infrastructure spending. When Candidate Clinton proposed spending $275 billion on road, airport and electrical grid repairs (surely not enough to move the needle on U.S. GDP growth), candidate Trump immediately proposed spending $550 billion on the infrastructure—doubling his opponent’s figure without any apparent analysis.

Many of the proposals have been made off-the-cuff and some are contradictory, but you can expect a President Trump to make an effort to cut taxes by reducing the ordinary income tax brackets to 12% (up to $75,000 for joint filers), 25% ($75,000 to $225,000) and 33% (above $225,000). The standard deduction would double, but itemized deductions would be capped at $100,000 for single filers ($200,000 for joint filers). Corporate tax rates would be reduced from a maximum of 35% to a maximum of 15%. Federal estate and gift taxes would be eliminated, but the step-up in basis would also be eliminated for estates over $10 million.

Lumping together candidate Clinton and candidate Trump’s various proposals (and making a variety of assumptions to cover the fact that the Trump plan is light on details), the Tax Foundation estimates that the Clinton proposals, in the unlikely event that they were fully-enacted, would reduce GDP by 1% a year and reduce the budget deficit by $498 billion. Candidate Trump’s proposals would reduce tax revenues by between $4.4 trillion and $5.9 trillion over the next decade, but the Tax Foundation believes they would add 6.9% to GDP.

Turning back to the markets, the investment herd prefers certainty and status quo to uncertainty and rapid change. A Clinton presidency checked by either the Republican House or a Republican House and Senate would provide a measure of stability. A President Trump, with Republicans controlling both houses of Congress, would represent significant uncertainty, and off-the-cuff policy proposals introduced into the news media at random times would likely spook investors. Loose talk about “renegotiating” America’s debt with Treasury bond holders here and abroad (read: default, followed by demanding a haircut) could, all by itself, lower America’s bond rating once again, following the downgrade aftereffect of the government shutdown.

A Clinton presidency would almost certainly have a negative impact on the coal industry, and to the extent that there are new environmental regulations—which can be imposed by regulation without consulting Congress—it could also negatively impact the energy sector overall. It would not be surprising to see a carbon trading initiative, and more broadly a requirement that whatever environmental degradation companies impose on society will have to be paid for by the companies themselves in some form or fashion.

A Trump presidency would seem to favor industry in a variety of ways. The proposals are frustratingly unspecific, but we could expect less regulation (particularly environmental regulation), no raising of the minimum wage, lower corporate taxes across the board and protectionism. On the other hand, if candidate Trump is serious about deporting undocumented immigrants, the U.S. labor supply would diminish in unpredictable ways. The policy would likely have the biggest negative impact on the farming and construction industries.

Perhaps the biggest risk in this election involves trade. A Trump Presidency would be seen, initially, at least, as a drag on the Mexican markets, and it might see America rip up its trade agreements and pick currency and trade wars with the emerging economic colossus that is China. Interestingly, the Trans-Pacific Partnership agreement, which both candidates now reject, was an effort by the U.S. to create economic ties to Singapore, Korea, Vietnam and other countries in the Asian rim, the better to counter Chinese economic influence. In terms of global trade, China stands to win no matter who wins this election.

The bottom line: prepare for the possibility (but not the certainty due to gridlock) of higher taxes under a Hillary Clinton presidency, and a more certain (but hard to predict the details) lower-tax environment under a President Trump. If you’re a Wall Street traders, you’re going to lose money under a Clinton presidency, and Southeast Asian nations stand to lose expected trade benefits under either president.

Despite the usual stereotypes, the deficit would likely go up under a Trump presidency and it might go down under a Clinton one—again with the caveat that comes with a divided government. The economic outlook would be much harder to predict. The reality is that no matter who wins, America will still represent the most dynamic economy in the world, and whoever wins the White House is unlikely to change that.