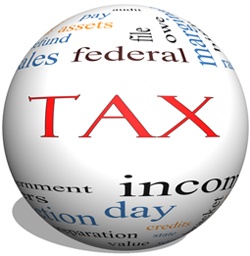 The U.S. House of Representatives passed its proposed tax “reform” bill last month, and now the Senate has followed suit. Interestingly, the two bills are different enough that the two sides are going to have to meet and hammer out a compromise.

Here’s a quick glance at the provisions in the Senate bill and some of the differences.

First, the Congressional Budget Office created a quick report that assesses a variety of income levels, and whether they’ll come out ahead, tax-wise (blue and white cells) or will lose ground financially (pink cells) under the proposed bill. 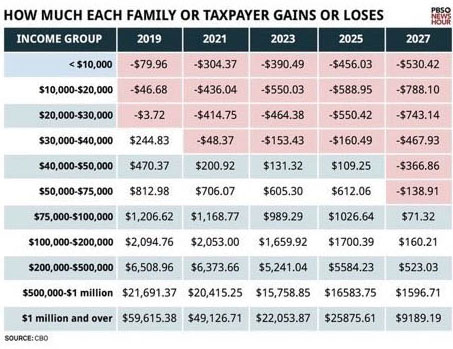 The Senate bill raises the standard deduction to $12,000 for singles and $24,000 for joint filers, compared with $12,200 and $24,400 in the House version. The Senators decided to keep the mortgage interest deduction as it is today, rather than (House version) limit the amount of mortgage debt upon which interest can be deducted to $500,000.

Meanwhile, the House repealed the alternative minimum tax, but the Senate decided to keep it, although it did propose to raise the income exemption levels from $50,600 (single) or $78,750 (joint) to $70,600 and $109,400 respectively. Both versions would raise the estate tax exemption to $11 million for individuals and $22 million for joint filers, but the House version would repeal the estate tax altogether in 2024, while the Senate version would not.

Like the House, the Senate bill would eliminate many popular deductions, including state and local income taxes, casualty losses and unreimbursed employee expenses.

It is possible that the final version will greatly reward taxpayers who own and receive income through so-called “pass-through entities;” that is, corporate arrangements where the taxes are calculated and paid by the owners rather than at the corporate level. This includes partnerships, Subchapter S corporations and limited liability companies, which would, under the Senate bill, be taxed at a rate of about 29.6% rather than the top rate, whatever that turns out to be.

Interestingly, this lower rate is also extended to publicly-traded pass-through vehicles—which suggests that you might see a lot of new tax-advantaged investment products come on the market if the bill is passed.

Speaking of publicly-traded entities, companies with significant earnings outside the U.S. will also receive a generous tax break; they would, under the Senate bill, be able to bring their earnings home at tax rates ranging from 7.5% to 14.5%—lower than the proposed new 20% corporate tax rate.

http://money.cnn.com/2017/12/03/pf/taxes/senate-house-tax-bills-individuals/index.html
https://www.nytimes.com/2017/12/02/business/tax-bill-offers-last-minute-breaks-for-developers-banks-and-oil-industry.html
https://www.forbes.com/sites/anthonynitti/2017/12/02/winners-and-losers-of-the-senate-tax-bill/#79382054254d
Empyrion Wealth Management (“Empyrion”) is an investment advisor registered with the U.S. Securities and Exchange Commission under the Investment Advisers Act of 1940. Information pertaining to Empyrion’s advisory operations, services and fees is set forth in Empyrion’s current Form ADV Part 2A brochure, copies of which are available upon request at no cost or at www.adviserinfo.sec.gov. The views expressed by the author are the author’s alone and do not necessarily represent the views of Empyrion. The information contained in any third-party resource cited herein is not owned or controlled by Empyrion, and Empyrion does not guarantee the accuracy or reliability of any information that may be found in such resources. Links to any third-party resource are provided as a courtesy for reference only and are not intended to be, and do not act as, an endorsement by Empyrion of the third party or any of its content. The standard information provided in this blog is for general purposes only and should not be construed as, or used as a substitute for, financial, investment or other professional advice. If you have questions regarding your financial situation, you should consult your financial planner or investment advisor.