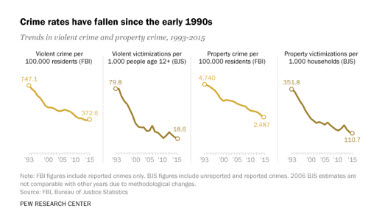 Crime in America is totally out of control these days, right? Every day you read about some new shooting, robbery, kidnapping etc., and the impression you get is that we live in an age where the streets aren’t safe and neither is your home.

When the Pew Research Center looked at the FBI figures for the quarter century from 1993 through 2015, they came to a somewhat different conclusion. Crime in America is actually falling at an impressive rate, when measured by violent crime per 100,000 residents, violent victimizations per 1,000 people, property crime per 100,000 residents or property victimizations per 1,000 households. (See chart) The news about crime, despite relentless headlines and campaign slogans, is almost uniformly good—and has been for some time.

The FBI data covers 18,000 different U.S. jurisdictions, while the victimization figures come from the Bureau of Justice Statistics. The former reflects reported crimes only, while the latter is a series of polls of individuals who are asked whether they were victims of a crime in the past six months, whether they reported it or not. The decline in violent crime ranged from 50% (FBI statistics) to 77% (BJS data), while the drop in property crime ranged from 48% to 69% respectively.

It appears that this story is not getting out to a mainstream audience. Twenty-one Gallup surveys conducted since 1989 show that most Americans believed there was more crime in the U.S. compared with the year before, despite the general trend downward. In late 2016, a Pew Research Center survey found that 57% of registered voters believed crime had gotten worse since 2008, even though the actual statistics showed that violent and property crime rates had declined by double-digit percentages during that span.