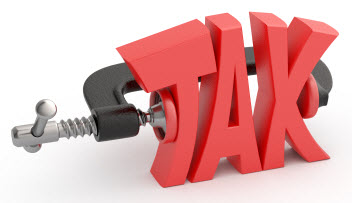 Chances are, you’ve heard that tax “reform” is right around the corner—that is, if you can call it “reform” when hundreds or perhaps thousands of new pages are about to be added to the tax code. First, the White House released its tax legislation wish list. Now the Republicans in the House of Representatives have released a proposal called the “Tax Cuts and Jobs Act,” which fleshes out some of the details.

It gets more complicated, because there’s effectively a fifth tax bracket that nobody is talking about, perhaps because it only impacts the highest-income Americans. Anybody who thinks tax “reform” is making the system less complicated should ponder how this would be calculated; once a person or couple have income sufficient to reach the top bracket, they would subsequently add on a 6% surtax to the amount over that top bracket threshold until the entire benefit of their 12% rate has been phased out. In effect, individuals with taxable income between $1 million and $1.207 million, or joint filers with taxable income between $1.2 million and $1.614 million, would face a special 45.6% tax bracket. After that, they revert back to the 39.6% rate. This is simplification?

The dreaded alternative minimum tax would be eliminated under the new bill; however, the AMT credit carryforwards would still be deductible. The bill would continue the current capital gains rate structure of 0% (for those with up to $51,700 individual/$77,200 joint in taxable income), 15% (up to $425,800 individual/$479,000 joint) and a 20% rate for those in the top tax bracket. The 3.8% Medicare surtax on net investment income (which includes capital gains and dividend income) would be retained, and be added onto the 15% and 20% capital gains rates. So the actual capital gains rates would be 15%, 18.8% and 23.8%.

Meanwhile, the personal deduction and standard deduction would be combined into an expanded standard deduction of $12,000 for individuals, $24,000 for joint filers. Some families with more than three children would lose benefits under this proposal, since their personal deductions under the old system would have exceeded the expanded standard deduction in the newly proposed one. A higher standard deduction, by itself, would reduce the number of people claiming itemized deductions, but in addition, the bill would greatly reduce the list of qualified deductions, reducing the number of itemizers even more. Under the new proposal, people would no longer be able to deduct any state or local income taxes paid, but they WOULD be able to deduct local real property taxes (like a home and/or a vacation home) up to a maximum of $10,000 a year. The mortgage interest deduction would be limited to debt on the first $500,000 of a home mortgage (down from $1 million today).

Miscellaneous deductions like the electric drive motor vehicle credit, the adoption tax credit and the credit for moving expenses to a new job would all be eliminated.

Corporate tax rates would be lowered dramatically. The C-corporation (which is publicly traded companies) would see a maximum 20% tax rate, while pass-through companies like S corporations, partnerships and LLCs would be subject to a maximum rate of 25%–with some very complicated provisions designed to keep their owners from shifting personal income into and through the company to take advantage of potentially lower rates.

Finally, for the very few people who pay estate taxes, the good news is that the exemption limit, currently $5.6 million, would double to $11.2 million per person, $22.4 million for married couples—and the estate tax, according to the language of the bill, would be eliminated altogether in 2024. Gift tax limits would also go up to the exemption amounts.

Would any of this affect your tax bill in 2017? No. The provisions, if enacted, would impact the 2018 tax year.

What are the odds of passage? Who knows? The Senate is reported to have its own ideas about tax “reform.”

Sources:
http://tinyurl.com/yagsu3a6
http://www.philly.com/philly/wires/ap/news/nation/washington/20171103_ap_56e8af4796944f54a5532a36691c5395.html
https://www.bloomberg.com/news/articles/2017-11-03/house-tax-cuts-don-t-fully-pay-for-themselves-analysis-finds?cmpid%3D=socialflow-twitter-politics
https://www.yahoo.com/finance/news/apos-trump-apos-tax-plan-184700638.html
Empyrion Wealth Management (“Empyrion”) is an investment advisor registered with the U.S. Securities and Exchange Commission under the Investment Advisers Act of 1940. Information pertaining to Empyrion’s advisory operations, services and fees is set forth in Empyrion’s current Form ADV Part 2A brochure, copies of which are available upon request at no cost or at www.adviserinfo.sec.gov. The views expressed by the author are the author’s alone and do not necessarily represent the views of Empyrion. The information contained in any third-party resource cited herein is not owned or controlled by Empyrion, and Empyrion does not guarantee the accuracy or reliability of any information that may be found in such resources. Links to any third-party resource are provided as a courtesy for reference only and are not intended to be, and do not act as, an endorsement by Empyrion of the third party or any of its content. The standard information provided in this blog is for general purposes only and should not be construed as, or used as a substitute for, financial, investment or other professional advice. If you have questions regarding your financial situation, you should consult your financial planner or investment advisor.