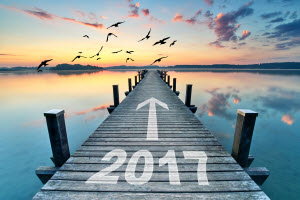 Perhaps more than any year in recent history, 2017 is shaping up to be a year of fiscal change. And with the unconventional Donald Trump as president, many of these changes will emanate from Washington, D.C.

Taxes are a topic of interest in every U.S. presidential election cycle, but we always warn that the candidates’ proposals often don’t stand a chance at becoming law. However, given Trump’s unexpected victory and that the Republicans also now control both houses of Congress, president-elect Trump’s tax plan stands a fighting chance. We just don’t know for sure what tax reform will look like. Kevin Brady, the Texas Republican who chairs the House tax-writing panel, says tax discussions are already in the works, but President-elect Trump’s plans remain uncertain.

Most believe that tax reform could mean substantial changes to the tax brackets themselves—with the most likely outcome being lower tax rates for most taxpayers. During the campaign, candidate Trump spoke of plans to slash revenue by an estimated $620 billion per year for 10 years, without specifying where he would make spending cuts. According to the Tax Policy Center, those tax cuts would mean an average tax cut of nearly $1.1 million for the top 0.1 percent of taxpayers, while households in the middle fifth of the income distribution would receive an average tax cut of $1,010. Of course, it also could be that Trump will ultimately move toward House Speaker Paul D. Ryan’s tax plan to reduce Federal revenue by a total of $3.1 trillion over 10 years.

As President Trump begins to govern, expect some shifts and about-faces. For instance, he has proposed leaving itemized deductions in place, but capping them at $100,000 for individuals and $200,000 for married couples. Because that change could have unintended consequences for charitable giving, it’s likely that an exception will be made for charitable giving if the cap is imposed.

The abolishment of the estate tax is also getting a lot of airplay. The “death tax” is paid primarily by the richest 10 percent of taxpayers and it’s significant. The IRS collected $21 billion from taxes on estates and gifts in its fiscal year 2016, according to data from the U.S. Treasury Department. Anyone actively engaged in estate planning should take a wait-and-see attitude when it comes to finalizing strategies for transferring money to heirs. Again, the new administration has the advantage of working with a cooperative Congress to repeal Federal estate taxes.

Another big question under President Trump will be the fate of the Department of Labor’s (DOL) fiduciary rule. In his article, “Trump administration could stymie DOL fiduciary rule by dropping legal defense,” Mark Schoeff, Jr. points out that instead of proposing new regulations or legislation to kill the rule, the new administration could simply refuse to defend the DOL rule from lawsuits. He explains that while “legislation to repeal the rule would have to overcome likely opposition from Senate Democrats, the Trump administration could undermine the rule simply by dropping its defense of the regulation in several lawsuits that are under way.”

While the DOL’s rule scheduled to be implemented in April 2017 is designed to protect those saving for retirement from conflicted advice and costly products that can erode retirement savings, some in the financial industry argue that the rule is too complex and costly to financial professionals. If President-elect Trump wants to enact legislation to repeal it, will Congress be able to fend off the attack? I hope so. Of course, the new administration could also delay the rule, giving them time to develop an alternative regulation.

Lastly, the markets have enjoyed a “Trump bump” since the election. Will that continue? Wharton Professor Jeremy Siegel had this to say about why long-term investors should continue to own stocks: “The Republicans control all three houses, but they don’t control it by such enormous margins that all their policies are a slam dunk to be passed. In fact, GOP margins have been reduced in both the House and the Senate from the last Congress. Nonetheless, the opportunity to enact more capital-friendly regulations and tax policies, particularly for corporations, is very positive for equities going forward.”

I wish you a healthy, happy, and prosperous new year.