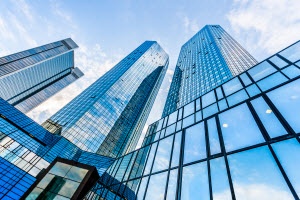 You may have been reading something about problems with one of the world’s largest lending institutions—Deutsche Bank—without understanding what the issue was. The bank has been reportedly due to pay a whopping $14 billion fine over its role in the 2008 market crash—specifically for selling junk mortgage pools to investors while knowing full well that they were junk. However, other reports say they bank may be able to settle with the U.S. Department of Justice for a mere $5.4 billion.

Deutsche Bank happens to be Germany’s largest lending institution, although the firm appears to have transferred most of its corporate energies from lending to the diciest corners of the U.S. investment market when it acquired Banker’s Trust Company. At the time, Banker’s Trust was a convicted felon ineligible to transact business with municipalities and corporate customers after pleading guilty to institutional fraud related to its handling of complex derivatives and dormant customer accounts. The merged bank then spent much of the first part of the 2000s creating and peddling exotic investment products and trading aggressively in the same securities for its own account. In Europe, meanwhile, the bank loaded up on so many risky sovereign loans from Spain and Italy that it now faces a potential combined credit risk of 30 billion euros from that source alone. The bank’s total capitalization has been reported at $17.9 billion.

This risky behavior was certainly not uncommon—U.S. lenders engaged in the same activities, and Lehman Brothers and Bear Stearns did not survive them—and the ending was not unpredictable: after 2008, the bank’s balance sheet was loaded with complex derivative investments that were hard to value or unload, and there were enormous liabilities looming over its future. Most importantly, from the standpoint of investors, the share price has fallen from 50 euros in 2010 to just over 10 euros (roughly $11) currently.

Deutsche Bank was not the biggest offender for the 2008 crisis based on the size of its fine—that “award” goes to Bank of America and its Merrill Lynch subsidiary, which was slapped with a $16.6 billion penalty for its nefarious role in the subprime crisis. Nor do analysts believe the bank’s existence is in jeopardy. At least one German magazine has reported that the German government has opened discussions to bail the bank out with (German) government money, and failing that, the bank may decide to sell shares to the public to recapitalize.

For those of us who thought that the purpose of lending institutions was to lend money into the economy—not play fancy tricks with tricky investments and gamble their own money in the more exotic corners of the markets—the Deutsche Bank debacle suggests a lesson: that greed always seems to find a way to punish those who rely on it as a business or investment philosophy.