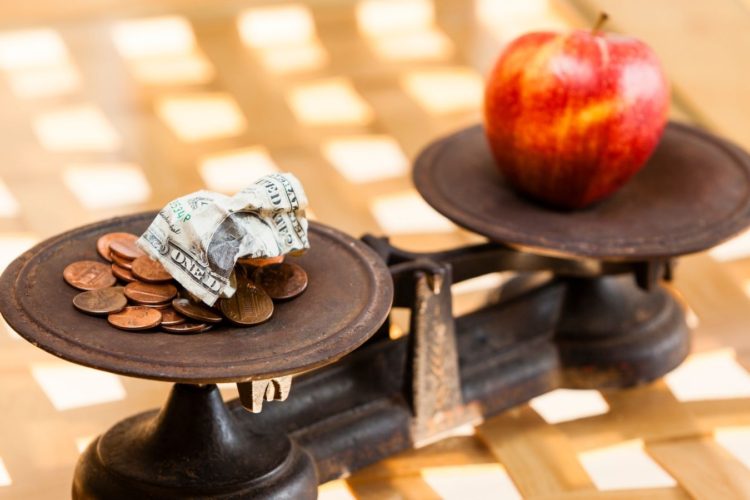 Since late in 2021, and especially since the onset of the Russian invasion of Ukraine, US consumers have seen the price of necessary goods and services—i.e., inflation, as measured by the Consumer Price Index (CPI)—go up, up, and up some more. The reasons for this, as repeated frequently in the media, have to do with the familiar themes of rising labor costs, supply chain disruption, and since the beginning of the war in Ukraine, Western sanctions against Russia, including Russian oil and gas.

But there may be more to the story. Some of the increasing costs that are currently squeezing consumers may have less to do with labor and material shortages and more to do with rising profits for certain corporations.

Take labor costs, for example. If worker pay has gone up at roughly the inflation rate, then it would make sense that labor costs were driving inflation. However, worker costs are running substantially behind price increases, since the average hourly wages across the US economy rose 4.7% last year, while inflation grew by 7.9%.

What about the supply chain, including the persistent problems with material shipments being held up on container ships idling outside of ports or ceasing altogether whenever another bout of COVID strikes? Well, it seems that ocean shippers made nearly $80 billion in the first three quarters of 2021, which is twice as much as in the entire ten-year period from 2010 to 2020.

The fact that we are seeing high inflation at the same time as corporate profit margins are at their highest level in 70 years cannot be totally coincidental. When Fortune magazine looked at the profit margins on 28 food and consumer goods from manufacturers listed on the Fortune 500, it found that the net profit margins were higher than pre-pandemic levels on 14 of them, and roughly the same on the others.

Okay, but what about gas prices? Surely the cutoff of supply from a major producer like Russia can explain the pain we’re all feeling at the pump, right? A month ago, the typical consumer was paying $3.488 a gallon; today the average cost is $4.325—an increase of roughly 30%. In some places, the increase has been more dramatic; Californians are now paying $5.34 a gallon when they fill their tanks.

On the other hand, only about 8% of the petroleum that the US imports comes from Russia (0.67 million barrels a day last year), and the US actually exported about 12 times that amount (8.63 million barrels a day) to other countries around the world—notably Mexico, Canada, and China. In most years, our domestic oil production exceeds consumption, which means that the ban on Russian oil should—theoretically, at least—have little impact on the American gas pump.

But perhaps a cutoff in Russian oil is causing a bidding war that is driving up prices everywhere, and we’re feeling the ripple effects? No, that doesn’t actually seem to be the case. The cost of a barrel of the benchmark Brent Crude (which basically means oil on the world markets) peaked at around $130 two weeks ago and has been falling ever since, down to around $106 currently. That’s a decline of almost 20%. Domestically produced oil is actually a bit cheaper.

It’s helpful to remember, when members of Congress throw around terms like “price gouging,” that any company is legally entitled to set prices at whatever the market will bear. And some of those price increases are set at the store level, so if there is exploitation, it may not be at the manufacturing or producing level.

The bottom line is that if customers are willing to pay 25% more for something this year than they did last year, then that’s simply evidence of capitalism at work. But at some point, consumers might stop simply accepting the conventional wisdom from news sources that our current inflation can be directly traced to higher production prices or shortages. If that realization ever happens, you can expect people to halt buying. Prices will drop, and corporate profits will fall back to more normal levels—or below.

As a fiduciary financial advisor and wealth manager, Empyrion Wealth Management has a single goal: to help clients make informed decisions that enable them to reach their most important financial goals. Whether inflation is high, low, or somewhere in between, our world-class research and experience can provide the guidance you need. If you would like greater clarity around your financial strategy, click here to schedule a complimentary “second opinion.”